Home / social commitment / “Help us, everything is needed” 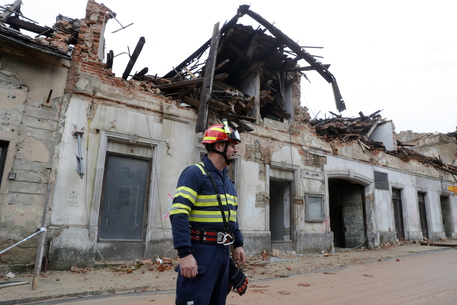 In memory of the victims of the 6.4 magnitude earthquake that struck a region south of Zagreb on December 29, devastating much of the population centers of Petrinja, Sisak, Glina, Majske Poljane and other nearby villages and causing seven deaths, some 30 injuries and enormous material damage. People left homeless numbered several thousand.

In view of what has happened and having been personally affected at the Sisak site where 51 of our logistics colleagues work inside the ABS (Acciaierie Bertoli Safau) plant, we feel like suggesting a link to offer your support as well.

We will be on the front line to support the affected population as much as possible, but ours will be just a droplet in a sea of solidarity thanks to your help.

We use cookies on our website to give you the most relevant experience by remembering your preferences and repeat visits. By clicking “Accept All”, you consent to the use of ALL the cookies. However, you may visit "Cookie Settings" to provide a controlled consent.
ImpostazioniRifiuta non essenzialiAccetta i cookie
Manage consent

This website uses cookies to improve your experience while you navigate through the website. Out of these, the cookies that are categorized as necessary are stored on your browser as they are essential for the working of basic functionalities of the website. We also use third-party cookies that help us analyze and understand how you use this website. These cookies will be stored in your browser only with your consent. You also have the option to opt-out of these cookies. But opting out of some of these cookies may affect your browsing experience.
SAVE & ACCEPT